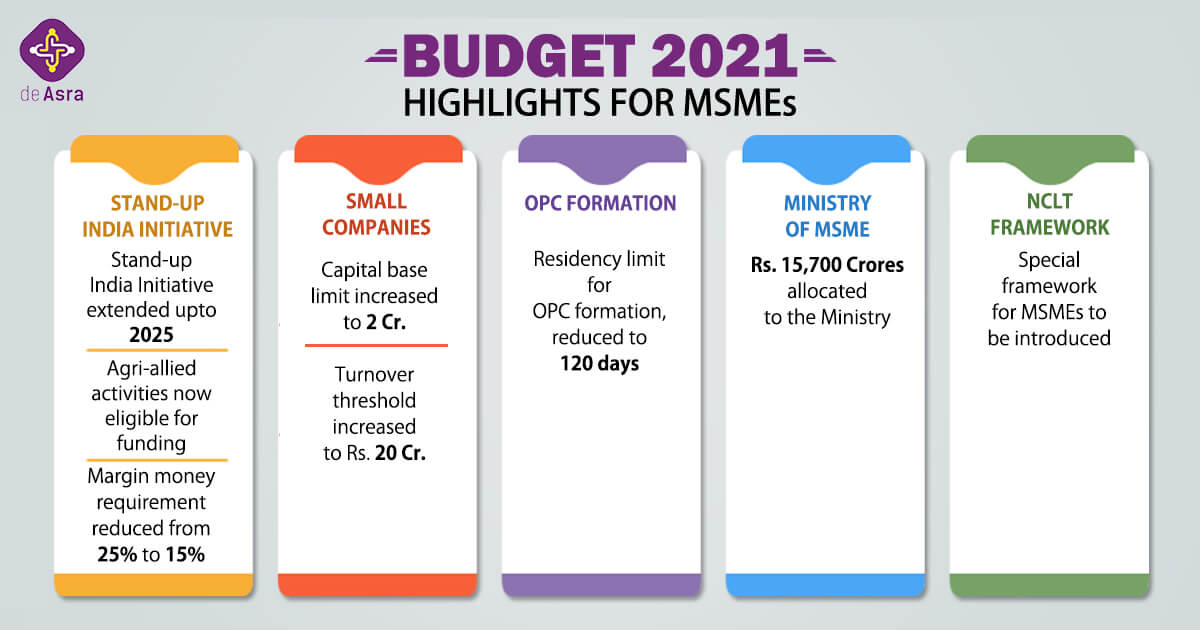 Implications Of Budget 2021 On Small Businesses

The Union Budget for the fiscal year 2021-22 announced last week by the finance minister, Nirmala Sitharaman, has everyone discussing it and trying to comprehend how it is going to affect businesses and individual tax-payers alike.

It was the first digital budget ever and an important one, given that it came at a time when the country is still reeling from the effects of the global pandemic and trying to slowly creep back to normal. That is the reason why small businesses and industries affected by the pandemic were looking forward to the budget to see what measures were going to be announced for them to revive and recover.

Since we at deAsra are always committed to helping micro and small businesses to start, manage and grow, it is a given that we elaborate on the highlights of the budget, covering the implications it has on MSMEs, including the small businesses that are a part of deAsra’s growing community of entrepreneurs.

The budget covered reforms and announcements for the MSME sector which comprises of micro, small and medium enterprises. However, this sector itself is too vast and comprises of several industries and business domains too. But we will discuss the highlights of the budget having implications on the size of businesses that deAsra works with – micro businesses with an annual turnover typically between Rs 5 lacs and Rs 1 Cr, the “missing middle”, also called mass entrepreneurs, local businesses serving local communities.

What does Mass Entrepreneur mean?

These are the entrepreneurs who fill the gap between self-employed individuals and start-up owners. Mass entrepreneurs are the business owners who create employment for 5 to 20 individuals and use local inputs or solve local problems. It comprises of local businesses such as retail stores, coffee shops, packaged food businesses, beauty salons, fashion boutiques, etc, all of whom form deAsra’s community of entrepreneurs.

Highlights Of The Budget For Small Businesses

The highlights of the budget that impact mass entrepreneurs, included as MSMEs, are as follows-

All these focal points of the budget directly impact mass entrepreneurs, micro and small businesses.

Industry And Experts Take On The Budget

Most of these budget announcements and proposals have been welcomed by the various small business sectors and industries. For instance, the announcements of NCLT framework being strengthened and implementation of e-courts system along with alternate methods of debt resolution and special framework for MSMEs have been appreciated as significant moves for the sector by the Coimbatore District Small Industries Association.

Similarly, the experts and mentors at deAsra also welcome the revisions and reforms suggested in the Union Budget for 2021-22, anticipating it to have a positive outcome on all the relevant sectors, including mass entrepreneurs and small and micro-businesses. The allocation of ₹15,700 has especially been celebrated as an effective move that will enable the transfer of funds to different schemes likely to be administered by the MSME ministry and the benefits of this move will manifest significantly in due course.

Additionally, the relaxation of the OPC formation requirements too will enable the free growth of OPCs in India along with increased investment by NRIs in the country. The revised definition of small businesses will allow more small businesses to be covered under OPCs and will also provide previously hesitant new entrepreneurs with the much-needed impetus to register their business through the company form of organization.

Summing up, the Union Budget 2021-22 has much to offer to the small and micro-business sector and looks promising for mass entrepreneurship too.

A Day In The Life Of A Food Entrepreneur

When I first realized that I was passionate about setting up a food business and becoming a food entrepreneur, I was both excited and nervous. There were so many questions running through my mind...wh...

How To Increase Sales During Festive Season

The most eagerly awaited festival of the year, Diwali, is here and the preparations for it are in full swing. Businesses and consumers alike are gearing up for the festivities and these festivals are ...

Just like individuals need a health check and our vehicles need regular servicing and sprucing, a business needs a routine health check-up too, to evaluate the business performance. Once an entrepr...