Milk is said to compliment a well balanced diet. The business of Food Products that is, the business of Dairy is said to be an all-inclusive as well. There is no shortage of customers in this business, it is not affected by the changing seasons and can be successful in rural as well as urban areas. Let us learn about a similar, well balanced business called Shriram Dairy…

No one notices the incense stick burning peacefully in a corner, while appreciating the calm, blissful atmosphere that it creates in the room. However, we should not forget the presence of the incense stick which allows us to appreciate the beauty of its fragrance. Every entrepreneur goes through something similar while starting his/her own business as well. S/he has to work hard but quietly for the prosperity of the business.

This needs to be mentioned, because we all see a successful, flourishing business on the outside. But, we fail to appreciate the hard work of the people who have struggled day and night to get the business to reach the heights it is meant to reach. A Brand is created when the people working for it provide the fertilizers of honesty and perseverance to help it develop. This work is enough to inspire many people all around the world.

This is the inspiring story of the Paygude family, which created the brand of Shriram Dairy in Pune. This family has provided milk to the people of Karvenagar, Pune, for more than sixty years now. They provided fresh milk to the residents from 5:30 in the morning. They also provided other dairy products like Curd, Buttermilk, Lassi, Paneer, Kharvas, Khawa, Ghee, Butter, Cheese, Cream, Chakka, Shrikhand, Amrakhand etc. Thousands of food loving Punekars have picked the brand of Shriram Dairy as their top pick in dairy products.

The quality products of Shriram Dairy are available through the shops in Warje, Karvenagar, Sinhagad Road and Rambaug Colony. Four to five thousand liters of milk produced by cows and buffaloes along with thousands of litres of other milk products are also sold. The Shriram Dairy is a leading contender for providing the best prices per litre among the dairy farming community.

60 years ago, Mr. Baburao and Mrs. Hirabai Kashinath Paygude, who lived in the small village of Kudje, near Khadakwasla had started their small dairy business in Karvenagar. They renamed the shop from Vinayak Dairy to Shriram Dairy in 1988-89. The Paygude family are devoted worshippers of God Ram. They believed that you will find success if you start working after uttering the name of Lord Ram. They named their dairy after this strong belief.

Mr. Kashinath Baburao Paygude was a reputed wrestler. He loved to exercise. He came to Pune to earn a livelihood. He defeated many reputed wrestlers from Pune during the period from 1948 to 1951. Later, he decided to retire from this field after a last fight with the famous wrestler, Mr. Lakshman Jambhle of Satara. This match ended up in a tie. Mr. Paygude’s uncle gave him a buffalo around this time as well. The business of Dairy farming began with him drinking the milk to maintain his health and then delivering the rest of the milk to other people. He accepted the principle of giving fresh, good quality milk without diluting it with water to the customers and practicing honesty in this business.

He started his life and small business in a small place, in the Sawant Inamdar Wada, opposite of Dnyan Prabodhini in Sadashiv Peth. The number of buffaloes for the business slowly increased from one, to 3-4 buffaloes. He had to move the dairy farm out of the Wada, due to the increase in the rent and the number of buffaloes. Their routine was fixed. He woke up at 3 in the morning, milked the buffaloes, bathe with some cold water and worship the Gods, tie the containers of milk to the bicycle and finally head out to deliver the fresh milk by 5 AM. He travelled several miles to deliver the milk to every house on the cycle. After the milk was distributed, he bought fodder for the buffaloes. He bought his own land of 7,623 sq km. for the first time in Karvenagar area in 1967-68, so he could stay connected with the Kudje village. He had to buy more land, as the number of buffaloes grew. His business started growing. During this time, Mr. Kashinath Paygude’s son, Mr. Vinayak Paygude entered this business, even if he was very young. He kept pursuing his education while working in the business at the same time.He graduated with a degree in B.A. The business stabilized and started to expand.

The number of customers and with them, the number of buffaloes increased due to the integrity, honesty and the quality of milk provided.

The business started expanding through the franchises at Karvenagar, Kothrud and Warje. The number of customers continued to increase as well. At first, the long and complicated process of pasteurizing the milk by heating it to a certain temperature and then cooling it down again was being used.

In 1984, the area of ​​Karvenagar area came under the municipal area. The Municipal Corporation started sending notices to the Paygude family for shifting the cattle sheds. Soon, the cattle sheds had to be closed. They tried getting the milk from other dealers, but it did not turn out to be of much benefit. Ultimately, they started getting milk from the farmer community at a good price. A modern concept of pasteurized milk was introduced in 1985-86 and the Dairy businesses went through a big change. New, modern machines were introduced. However, there was not much information provided. Big refrigerators were bought used to cool the milk down. However, he had to suffer some financial losses due to technical difficulties. Mr. Kiran Shaligram, who was an expert in this field, offered a helping hand to the Paygude family. They got a small machine to pasteurize the milk from him. The dairy business was progressing rapidly. Knowledge about the modern technology was very important to run a business in such times.

Around this time, the third generation of the Paygude family, that is, Mr. Vinayak Paygude’s elder son Mr. Shridhar Paygude decided to join this family business.He completed two years of Diploma in Dairy Development in Mumbai between the years 1994 and 1996, after graduating from Class XII in 1994. He also got a gold medal in this course, too. Later, he had to go to Gujarat to get a degree in B.Tech. He was eager to complete his education yet on the other hand, the growing and ever expanding business was calling him. He then decided that he would focus on getting some practical knowledge, than concentrating on the information learned from books. He started walking down the path of bringing in new technology in the business, as he had completed a course in Dairy Development. Shriram Dairy used to only sell milk. But now, they started producing and selling different milk products, too. Shriram Dairy opened its first shop in Karvenagar, Pune in the year 1997, with the intent of entering the retail market. They sold milk, along with ghee, butter, buttermilk, paneer, cheese, Shrikhand, Aamrakhand, Lassi, and other dairy products.

The business developed even more. Mr. Vinayak Paygude’s second son, Mr. Shriram Paygude entered the business as soon as he graduated.The business of Shriram Dairy developed rapidly with Mr. Shridhar and Mr. Shriram on board. They started to distribute the milk through plastic bags once they came to know that the boys delivering the milk were diluting the milk with water. The customers were not ready to accept this method at first as they had to pay a little extra money for the plastic bags, but after they came to know the reason behind them, they willingly cooperated.

The process of collecting milk, pasteurizing it, filling it in the plastic bags and making different dairy products was made easier through the introduction on modern technology. 15-20 workers, 15-20 boys to deliver the milk and the entire Paygude family started working together and started helping the brand of Shriram Diary reach new levels of success. A total of six retail shops were started at Shivne, Warje, Rambaug Colony, Navasha Maruti (Sinhgad Road) along with Karvenagar. Milk and other dairy products were also provided to well known Confectioneries and Ice Cream Shops. Some products are sent to Thane and Amravati as well.

Shriram Dairy tried to sell their products through the medium of Dealers; but they had to stop and focus on establishing Retail and Franchisee network, due to some financial losses. They started reaping benefits of focusing on this method. The customers started to get a variety of high quality products. They started to find ways to manage the growing business. They registered the name ‘Shriram Dairy’ as a trademark with the government. With the help of banks and modern technology, tireless efforts of Paygude family and dedicated workers, Shriram Dairy which was started almost 60 years ago with a few litres of milk, has now reached a successful mark with a daily sale of 4500-5000 litres of milk and more than 1000 litres of dairy products sold every day. Shriram Dairy never compromises on the quality, quantity and rates of products.

The three generations of the Paygude family have taken great care of the seeds of the business that were planted by Mr. Kashinath Baburao and Mrs. Vijaya Vinayak Paygude. They watered the plant of business with hard work and dedication to make sure it had a strong base and flourished. They decorated this flourishing tree with modern technology. The fact that the food loving Punekars have chosen the Shriram Dairy as their first choice just goes on to prove this business’s success.

We should not forget that thousands of customers are able to enjoy the taste of the milk and various milk products of Shriram Dairy because of the tireless efforts of the three generations of the Paygude family. 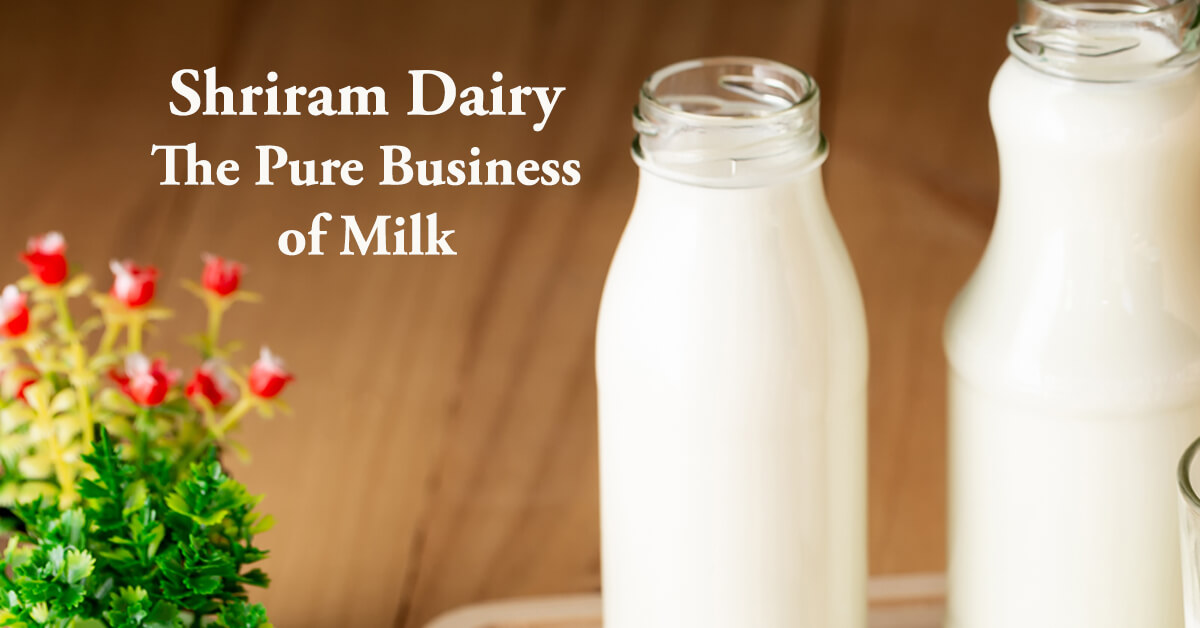