Skip to content
Business Entity Forms
BACK TO HOME 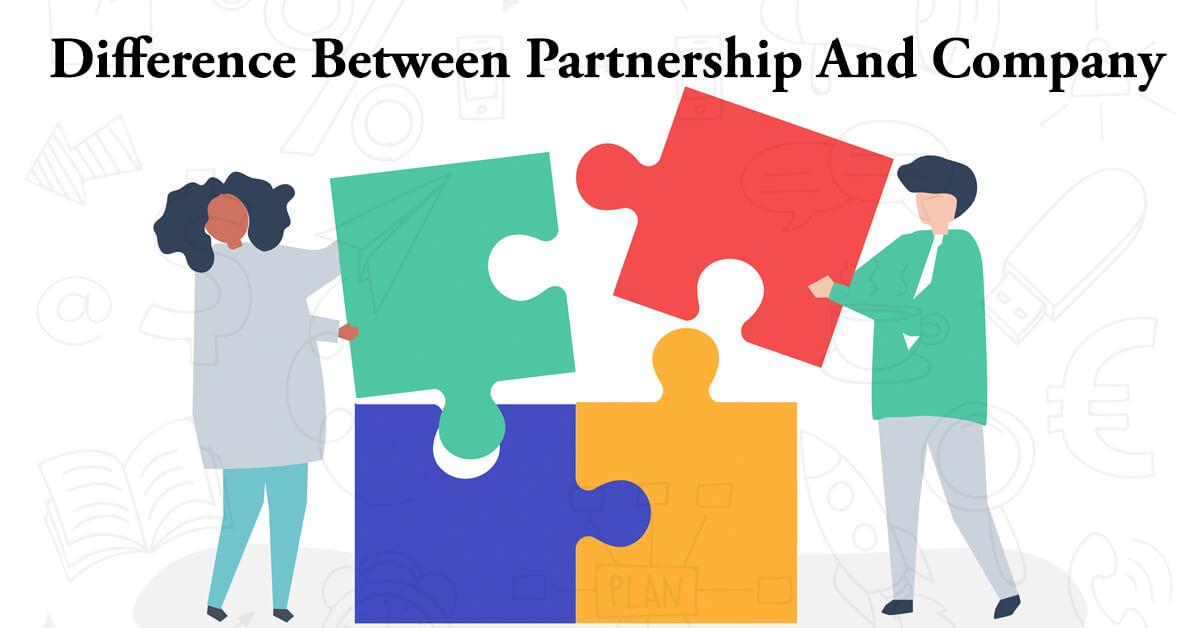 Difference Between Partnership And Company

One of the biggest decisions to make while deciding to start your own business is deciding the business structure while incorporating the business. A business entity gives an organised structure to the enterprise and is formed and administered as per corporate law in order to engage in business activities.

When talking about businesses and the various types of business entities that can be chosen from, let’s remember a quote by Steve Jobs where he pointed out that “Great things in business are not done by one person. They are done by a team of people”. This thought of his, when translated in terms of business entity, makes it clear that while choosing a business structure, it is better to work together with someone, whether another partner or a team of shareholders and supporters. This means that a partnership or company wins over a sole proprietorship.

What Is A Partnership?

A partnership can be defined as a business operation that is legal,  between two or more individuals, all of whom share the management of the business along with the profits of the business too.

Salient Features Of A Partnership

A Partnership has several key features-

What Is A Company?

A Company is a legal entity that is composed of a team of people, known as members wherein the liability of the members or shareholders is limited to their shareholding in the Company.

Salient Features Of A Company

The characteristic features of a Company include-

Difference Between Partnership And Company

While discussing the salient features of a partnership and a company one can notice the differences that exist between the two types of business entities in terms of formation and operation and several other features which are discussed here.

A partnership is usually the relationship between any two or more individuals who come together to run a business and share the profits and responsibilities and the coming together of the partners forms a firm. A company, on the other hand, is a voluntary association of people which is a registered body and is formed for the purpose of a common object.

In a partnership, the management of the firm lies in the hands of all the partners, while in a company all the shareholders of the company select representatives, called as directors, who manage the company and carry out the day to day affairs of the company.

A partnership does not have a legal identity that is separate from its members while a company is a corporate body which has its own separate identity from that of its members.

In a partnership firm, quick decisions are possible, while in case of companies, taking decisions on important issues requires a fairly long time.

In a partnership, after the death of a partner, the remaining partners and legal Heir of Deceased partner succeed the partnership, with the consent of other partners. In a company the succession is perpetual.

In a partnership, the firm can be dissolved with the consent of the partners while in a company legal procedures are required for winding up the company or for going ahead with liquidation as the case may be.

Shares of a company are freely transferable unless restricted by the Articles. But a partner cannot transfer his share without the consent of all other partners.

The act of filing of financials with the regulatory authorities is not applicable for a partnership, while in a company financial statements are to be filed annually with the Registrar of Companies.

Hope this article has given the difference between partnership and company. There are no legal formalities required within a partnership such as filing of forms for the creation of charge while in a company, in order to create a charge adequate forms need to be filed with the Registrar of Companies.

The difference between partnership and company can help understand both the business entities better and make a more informed decision about choosing the better one for a particular business.

How To Register A Company In Maharashtra?

Business is done best when working with others and with the support of others and what if the support comes from not a person or individual but in the form of a region, namely, the State of Maharashtr...

What Is A Partnership Business?

For every business, a good team comes into being when the separate individuals that work together, create, in essence, another separate higher entity which is better than any of those individuals ca...

Essentials Of An LLP Agreement

Selecting and registering a new business under any of the suitable business structures is a vital prerequisite for the business to operate. There are a number of business entities to choose from, an...

How To Form A Company?

One of the first steps when starting a new business, which is often not given enough thought to by the entrepreneur, but which is vital for the business to start operating, is deciding the type of b...

How To Start A Partnership Firm?

When registering a partnership firm in India for startups, there are some basics that need to be covered. Partnership and proprietorship are the two most popular forms of business organisations in Ind...